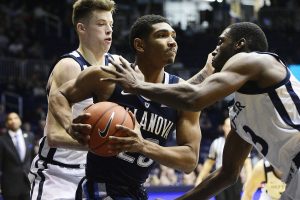 We’ve got some quality matchups on the Tuesday college basketball card to say the least. Our focus will take us to the City of Brotherly Love, where the Villanova Wildcats host the Butler Bulldogs in a massive Big East battle.

Villanova is listed at BetOnline Sportsbook and across most of the market as a 4.5-point favorite with a total of 129.5. Pinnacle was the first book to move to -5, an indication that there could be some sharp money coming in on the home favorites early in the betting process, especially with the opening line at -4.

This is a game that we discussed on Monday’s edition of BangTheBook Radio during our Handicapping the Hardwood segment with professional handicapper Kyle Hunter. While we encourage you to listen to that fine bit of audio, one of the biggest takeaways from the breakdown of this game was that Villanova has really slowed down in conference play. The Wildcats are using up more of the shot clock in search of more open looks out on the perimeter. This total certainly seems low for a Villanova game, but now you know the reason why.

It doesn’t hurt that Butler’s defensive prowess has been on display game after game this season. The Bulldogs bring a top-15 defense by adjusted defensive efficiency to the table in this one per Bart Torvik. Butler is a top-15 defensive rebounding team and also ranks 10th in Effective Field Goal Percentage defense. Lavall Jordan’s team is also eighth in the country at defending the three-point line, as opponents are only shooting 27.9%.

Therein lies the key to this game. Jay Wright’s Wildcats like to go wild from beyond the arc. To this point, 50% of Villanova’s field goal attempts in their five Big East games have been three-balls. They are 90th in the country at 35.2% from distance, but they have had some big home/road splits in that department. In their nine wins at home, Villanova is shooting 38.6% on triple tries. In eight games away from home, the Wildcats are shooting 31.8%.

To make up for their lack of three-point success, the ‘Cats are #1 in the nation in road/neutral venues at 58.9% from two-point land. Ironically, they are 250th at home at 48.3%, which makes virtually no sense. The inconsistency of this team does make some sense, however. Freshmen Justin Moore and Jeremiah Robinson-Earl are shouldering a bigger load than most freshmen of the past. Villanova has had some enormous losses of talent over the last couple of years with some deep NCAA Tournament runs and a lot of players selected in the NBA Draft. Junior Collin Gilllespie is the highest usage player on the roster, despite only playing 71% of the minutes available last season. Sophomore Saddiq Bey is the team’s most effective player and sophomore Cole Swider has also played a huge part.

Wright will have his team ready to go by March. He always does. But there are some clear kinks to work out before we get to that point because this one of the youngest Villanova teams that Wright has had in quite some time. This team is by no means short on talent. It is simply a group learning to play together and learning how to win together.

While the analytics sites like KenPom.com and Bart Torvik have Butler favored or the slimmest of dogs in this spot, you have to respect Villanova’s reputation and what they have done at home this season. After all, the only three losses for the Wildcats have been at Ohio State, on a neutral to Baylor, and at Marquette. Butler is certainly better than Ohio State and Marquette, but the Wildcats are on their home floor here.

And that is a question that Butler has to answer. The Bulldogs have some excellent victories at home, including wins over Minnesota and Florida. They also have nice scalps on neutral floors over Purdue and Stanford. Is Providence a signature road win? Not with the problems that Ed Cooley’s team has been having. Most recently, Butler lost by 13 on the road at DePaul with the worst defensive performance of the season with 1.186 points per possession allowed.

In fact, the two worst defensive performances of the season for Butler have been the last two games. That road loss to DePaul was the worst, but the home loss to Seton Hall with 1.14 PPP allowed six days ago was the worst at the time. Is Jordan’s team starting to wear down a little bit from the grueling schedule or were these performances exceptions to the norm?

At this point, Butler seems to be a little bit of a depressed stock, given the opening line and then the move towards Villanova. Maybe there will be a time to buy back in with Butler in the not too distant future, but this ain’t it. Villanova’s home/road splits, particularly from distance, are too great to ignore in this one. Their two-point percentage is going to improve at home as well.

Now, it is fair to play devil’s advocate and point out how experienced Butler is with seniors Sean McDermott and Kamar Baldwin leading the charge and then juniors Aaron Thompson, Bryce Nze, and Jordan Tucker. This is not a team that will be overwhelmed at Finneran Pavilion.

It is just a team that is running into a tough spot against a team that seems to have figured some things out on offense to improve the efficiency at the three-point line. It is also a fourth straight home game. All signs point to Villanova here.