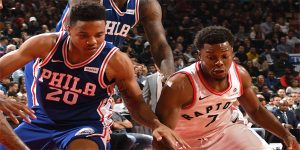 The Philadelphia 76ers (29-16; 20-24-1 ATS) are rolling on a four-game winning streak despite playing without Joel Embiid. They will try to extend the streak Wednesday night when they visit Scotiabank Arena in Toronto, but the 76ers will have a tall task to beat the Raptors (29-14; 24-19 ATS). The reigning champions are also riding a four-game win streak, and coach Nick Nurse can finally count on all his best players. The Sixers and Raptors will meet for the third time this season, and the series is tied, as each team has been successful on the home court.

The 76ers will miss Joel Embiid who’s recovering from a hand injury. The Raptors are coming in full strength.

Toronto opened as a 6-point favorite with the total at 218.5 points. The Raptors are only 1-4 ATS in their last five meetings with the 76ers when listed as favorites.

The Sixers are No. 5 seed in the East, while the Raptors are one game ahead at the third spot. These two teams will battle for the Atlantic Division title, too, so their head-to-head record could be crucial at the end of the regular season.

Philadelphia will wrap up a three-game road trip. The Sixers are coming off a 117-111 road win over the Brooklyn Nets. On the other side, the Raptors defeated the Atlanta Hawks 122-117 as 9-point road favorites this past Monday. They will hit the road after the clash against the Sixers to visit the New York Knicks on Friday night.

Back in November, the Raptors beat the Sixers 101-96 as 1.5-point home dogs. Interestingly, Joel Embiid went scoreless in 32 minutes on the floor. Two weeks later, the Sixers defeated the Raptors 110-104 as 3-point home favorites, and Embiid had just 10 points and eight rebounds along with seven turnovers. Considering the first two encounters of the season, the Sixers shouldn’t miss Embiid a lot, although he’ averaging 23.4 points and 12.3 rebounds per game.

Both Philadelphia and Toronto will have to execute well offensively if they want to win this game. Considering their defensive potential, both sides will have a difficult task. The Raptors’ second unit could be an X-factor, as the reigning champs certainly have more offensive firepower on their bench than the Sixers.

I expect to see a tight battle between two tough defensive teams with a lot of contested shots, so betting on the under is my first choice here. The under is 7-2-1 in the previous ten meetings between the 76ers and Raptors, and it is 5-1 in the last six matchups at Scotiabank Arena. Also, neither team prefers to play at a fast pace, while the Sixers should try to slow down the tempo as much as they can.

When it comes to the side bet, I suggest you go with the Raptors to cover a 4-point spread at -160 odds. A 6-point spread could be too much for the hosts to cover if we get a tight game down the stretch. Although the Sixers will miss their best player, they should keep it tight. Still, I don’t think they will upset the Raptors on the road. The reigning champs are finally healthy, and the Sixers are only 1-6 ATS in their last seven outings on the road.